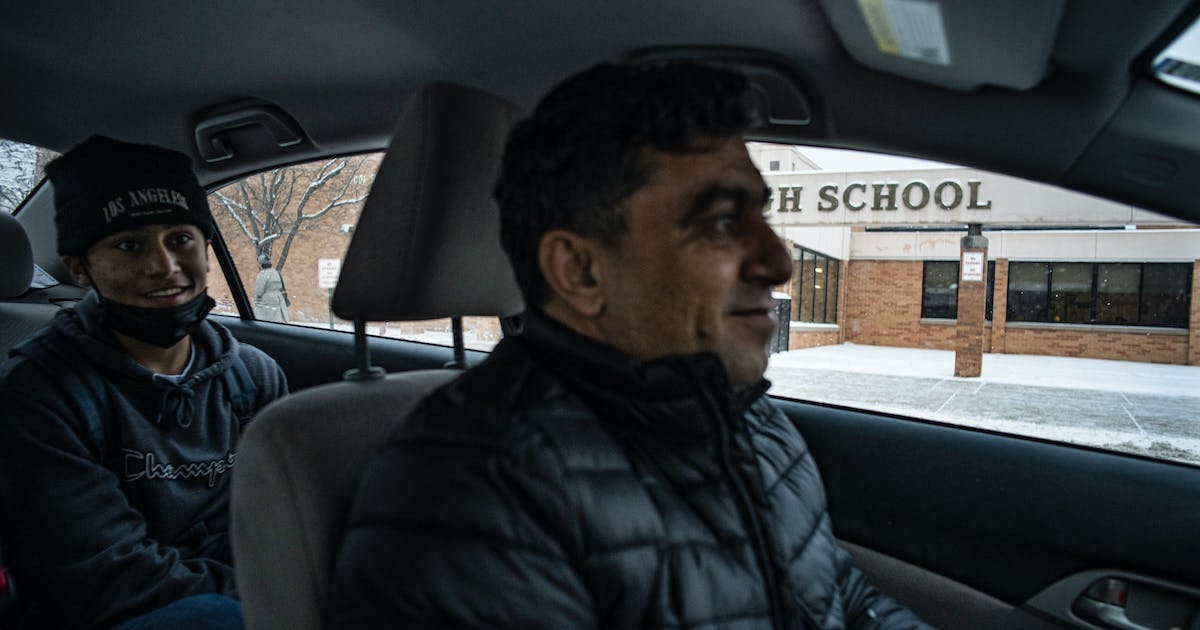 Afghan interpreter questions cost of war as he works at MOA

Khyber Sakhi felt a hammering in his brain. His neck went limp.

Sweating, he called his Afghan interpreter friend in the middle of the night to rush him to the emergency room. Doctors found that Sakhi’s blood pressure had skyrocketed. He told them he was under stress.

He didn’t say exactly why — that a cloak of gloom had enveloped him since he fled Afghanistan after serving for five years as an interpreter for the U.S. military. Sakhi had resettled far from beloved relatives, recently missing the death of his only brother. Starting over in Minnesota in 2014 was harder than he had imagined.

Sakhi’s coolness under pressure had won praise from U.S. soldiers fighting the Taliban. But in the months after his trip to the hospital, his mind grew cloudy. He yawned often, his mouth dry, tears welling. He let his hair grow too long, and his interpreter friend would drag him to the barbershop. Sakhi fell behind on bills for months.

A doctor diagnosed Sakhi with depression in 2019 and suggested he work less, an impossibility for a man supporting his wife and seven children in Richfield as well as relatives abroad. He discontinued antidepressants after they made him too sleepy and dizzy to do his job, and he gradually renewed his spirit without them.

Yet he could never entirely unyoke his emotional state from the fortunes of Afghanistan. Sakhi watched his mother country spiral into corruption and discord, fearing that then-President Donald Trump’s controversial deal with the Taliban in 2020 to withdraw troops by the following year augured the return of the fundamentalist regime. Nine months after becoming an American citizen, Sakhi cast his first vote for president: Joe Biden.

Then the Taliban seized control in August.

Biden directed the last U.S. military plane to leave Kabul, and Sakhi saw everything he and the troops had worked for unravel.

He was disheartened at the killing of 10 civilians in a U.S. drone strike in the final hours, horrified to learn that the M16s he and the Americans had trained the Afghan National Army to use were in the hands of the enemy. He could not fathom how thousands of interpreters for the U.S. military were left behind, including the cousin who suggested he apply for the job.

Upon seeing Afghan Vice President Amrullah Saleh crying on TV weeks later, Sakhi broke down, too. He usually found solace confiding in his wife; that night he went right to bed. “If the leader of the country is in this situation,” he asked, “how are the local people?”

His wife told him to stop watching such coverage. “When I think too much,” Sakhi acknowledged, “it makes my health worse.”

Sakhi spent his first few years in the U.S. working for a Pakistani immigrant at Cricket Wireless, and eventually acquired four phone case and repair kiosks at the Mall of America from another Afghan interpreter. The more he threw himself into the phone business, the less time he had to worry about his homeland.

But after American troops withdrew, he couldn’t help but weigh the justification for America’s longest war.

“What I did was really worth it because I helped my nation, I helped my Afghan Army and the U.S. Army and NATO forces,” Sakhi said in September. “But … all the progress we did in the last 20 years, we lost it in one or two days.”

Later, he was less diplomatic.

“Why Americans died? Why they sacrificed their lives? Why our people sacrificed for this? Why? It was no reason. America spent trillions of dollars and if that was the reason, just to go and kill Osama bin Laden and give power to the corrupted people or the warlords” — he shook his head — “it’s not worth it.”

Sakhi said the evacuation was poorly planned — he regretted backing Biden — and too many interpreters remained in danger. “They are humans, right? So we should think, why are they suffering … Why they’re not worth it?”

Americans assume Afghans must like war, Sakhi figured. He wishes they understood that most are decent people held hostage by a revolving cast of warlords, corrupt leaders, foreign powers and insurgents.

It was the day after Veterans Day, and Sakhi spoke while sitting at a kiosk on the mall’s third floor, inspecting the innards of a frozen iPhone. He attached a new screen. He replaced the battery. Nothing worked. After nights contemplating matters that confounded the highest defense leaders, Sakhi found satisfaction in helping customers with simpler problems. But he could hardly solve all of them.

Sakhi’s wife called to ask if he was coming to the mosque for noontime prayers, but more battered phones awaited. He hurried to the back of another kiosk, unfolded a rug he kept under the counter and carried out his prayer rituals. Sakhi liked to ask Allah for peace — for the whole world, not just Afghanistan, casting his faith in a shared humanity that transcended familial and national bonds.

Sakhi’s day fell into a fast rhythm. He turned down his Afghan interpreter friend’s invitation to go deer hunting that Saturday — Sakhi couldn’t find anyone to cover for him at the mall — but his eyes brightened when another Afghan friend, Sher Mohammad Mulakhail, paid him a surprise visit that afternoon.

Mulakhail brought Mirwais Momand, a newly evacuated Afghan who used to work with him as a security guard at the U.S. Institute of Peace in Kabul. Mulakhail showed him Momand’s phone and said he needed a screen protector.

“I have to charge you,” Sakhi joked, laughing heartily. “Nothing is free — this is America.”

They took a selfie together, cracking jokes in Pashto. Mulakhail invited Sakhi to a party that night, where they would play cards over tea, but Sakhi’s work at the mall ran too late. Returning to his apartment to eat with his family was the happiest part of his day.

Sakhi believes, in the end, that working as an interpreter was the best decision for his children’s future. It allowed them to come to America. While war had irrevocably warped life for him and his parents, Sakhi’s progeny would know peace.

His oldest daughter, 18, is studying at the University of Minnesota — she dreams, as her father once did, of being a doctor — and his 17-year-old son is earning accolades on the soccer field. Sakhi often takes his only American-born child, 3-year-old Fathima, to the mall, indulging her requests for candy and marveling at her gift for charming him out of the darkest malaise. His 15-year-old son, Essa, is a phone repair whiz (“my top technician,” Sakhi joked), recently drawing the effusive praise of a customer who watched him fix her Samsung Galaxy as mall performers blasted “Land of the Free, Home of the Brave.”

Sakhi teaches his children about Afghanistan and the public service ideals he carried from the military. “You guys should be a good citizen for the world,” he tells them. “Try your best to serve humanity.”

Sakhi’s old boss offered to help sponsor Sakhi’s parents and other relatives to come on humanitarian parole visas, but the fees and required documentation were difficult to amass; a crush of applications had overwhelmed immigration bureaucrats.

Sakhi told his family they would try.

Sometimes he was so down that he could not bring himself to answer the phone when his beloved father called. Sakhi felt he had to present an optimistic face to his kin: “I try to be strong, to have courage, to give them hopes. If I tell them I’m down and disappointed, their eyes are on me … they will be very disappointed.”

Overwhelmed by a sea of need, Sakhi resolved to aid the few he could. His cousin, a security guard for Americans who was evacuated in August, moved from a military base to a local hotel, and Sakhi began picking him and his family up for dinner and negotiating with their case manager between customers.

His cousin started accompanying him to the mall, eager to learn English and the phone trade. He wiped the counters and studied the rainbow of cases from Sakhi’s Afghan supplier in Chicago. He enjoyed strolling the mall’s concourses, though the Christmas music gave him a headache.

Sakhi was used to tuning it out, sometimes thinking “Allahu akbar” — Allah is the greatest —as he held his prayer beads. He didn’t quite understand who this Santa Claus in the songs was, though he knew enough to order merchandise bearing his image.

One night in December, Sakhi left the mall early to help his cousin’s family move into a house. He thanked the landlord, who said his neighbor criticized him for renting to Afghan evacuees, not realizing they were American allies. Then Sakhi hurried through the falling snow to pick up his daughter from the U. He wore a cheery visage, but his eyes were tired. He meant to see a doctor again, if he could only find the time.

Days later, a white American man came up to Sakhi’s kiosk with an Ethiopian immigrant he was tutoring to inquire about a phone case.

“You’re not from America originally,” the customer said. “How did you learn English so quickly?”

Sakhi explained that he learned the language before moving here. He smiled as he spoke of his service for the U.S. Army.

The customer turned to his student: “Look at him … an immigrant from Afghanistan, now this: he’s making it.” The man turned back to Sakhi and clapped him on the shoulder. “I’m glad you’re here.”

Horrific moment Ohio state trooper, 25, slams into back of truck at high speed on quiet highway