Home » Brabus’ first ever motorcycle sells out in two minutes 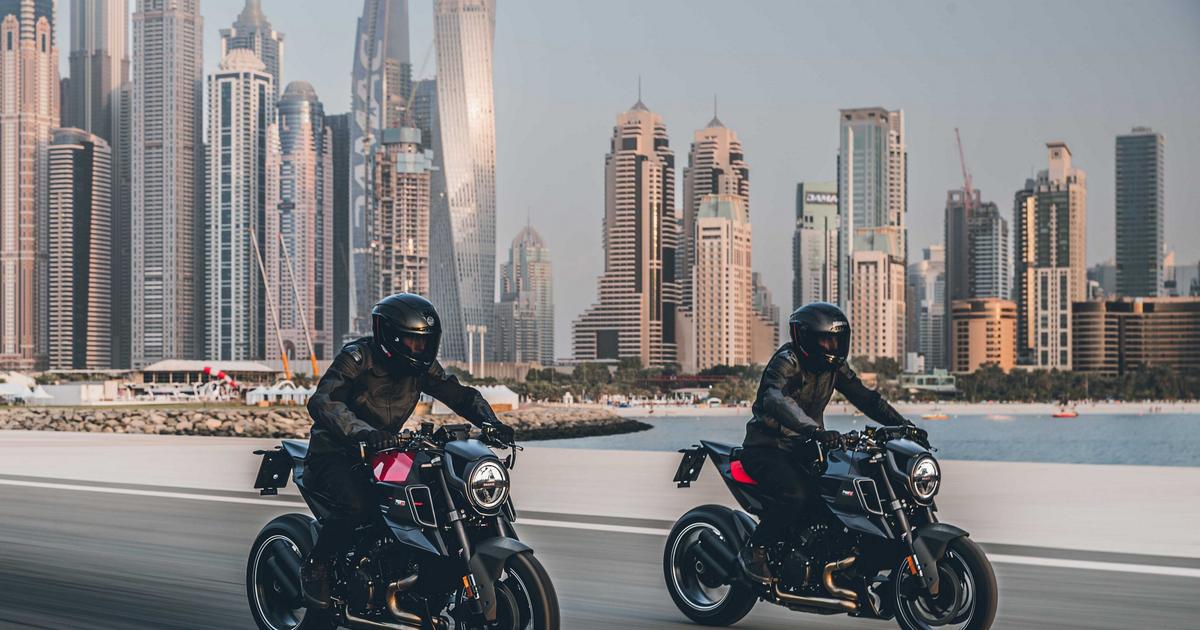 Brabus’ first ever motorcycle sells out in two minutes

Best known for its high-performance Mercedes-Benz variants, Brabus this week introduced its debut motorbike in alliance with KTM. The 1300R builds on the brand new 1290 Super Duke R Evo in a small production run that was snapped up in no time.

The Germans took on the challenge of transforming the Austrians’ new range-topping Duke to collectible and blindingly fast jewelry, relying on its 1,301-cc LC8 V-twin that produces no less than 180 hp and 140 Nm (103 lb-ft). With no realistic need to fiddle with the propulsion system of a proverbial ground-to-ground missile, Brabus focused on creating its own visual identity, avoiding any major intervention to the motorbike’s essentials. The only part that may weigh on engine performance is the addition of a Brabus slip-on twin-pipe exhaust can, yet on paper the 1300R declares the same power and torque maxima as the Super Duke.

At first sight the Brabus 1300R does stand apart from the KTM it spawned from, primarily thanks to the round headlight and the two rectangular air-scoops on its sides – looking more like what Husqvarna would design around this noble base, if we ever get to witness the rumored Svartpilen/Vitpilen 1301 duo.

There’s a host of custom-made carbon and billet parts all over the bike’s body, and most of them are manufactured by Brabus, presumably destined to form a new directory in the brand’s tuning catalog. Standout among these are Brabus’ Monoblock Z lightweight forged wheel rims, triple clamps, brake and clutch levers, adjustable rearsets, and heated seat in black or red color.

As for the rest, KTM had taken care of everything in the first place with a superbike-spec electronics’ package, starring the latest WP APEX semi-active suspension system.

All the changes designed by Brabus for the 1300R managed to shave some 6 kg (13 lb) from the Super Duke’s dry mass, but that’s probably the least important feature for potential buyers. The hard part is getting your hands on one.

Brabus announced a limited run of just 154 motorcycles, half of which are finished in Magma red color and the rest in Signature black. Unsurprisingly each costs €39,500 (approx. US$44,860), which nearly doubles the average European pricing of the KTM 1290 Super Duke R Evo.

Apparently it was very easy to attract 154 people from around the globe intent on forking out such an amount of money for a bike they’ve only seen in pictures; Brabus pre-sold the whole lot in 1 minute and 55 seconds! The electronic order form was activated on KTM’s website on Monday, February 14, on 3 pm CET and less than two minutes later the limited stock was depleted.

KTM had tasted similar success a few months ago with the RC 8C sportbike, whose 100 examples sold out in some 4 minutes from the moment the ordering system came online. Given that the track-oriented evolution of the 890 Duke R cost €35,000 (US$39,750) and wasn’t even road-legal, it’s hardly surprising that Brabus’ limited production evaporated in a heartbeat as well. At least the 1300R’s new owners will get to flash it around town, and it will still yield tons of fun in a racetrack.

Those who would like to own one but didn’t make it in time can hope (a lot) for order cancellations by getting on KTM’s waiting list.