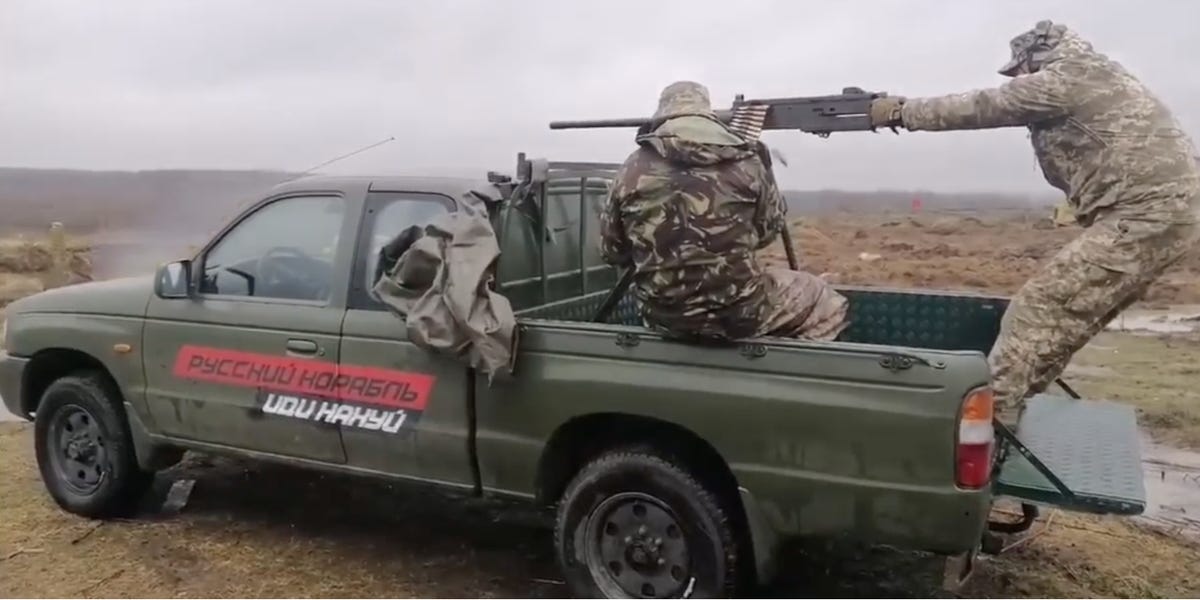 A team of volunteers made up of Ukrainians, Europeans, and Americans is working on retrofitting civilian vehicles into battle trucks for the Ukrainian army.

The team, spearheaded by Ivan Oleksii, a 25-year-old esports analyst originally from Kherson, southern Ukraine, is working to equip the Ukrainian military with retrofitted cars from around Europe.

Since starting the project in March, the team has fully refitted 60 vehicles and has another 15 in progress to supply the Ukrainian army’s mobile combat units.

Oleksii, who is based in Lviv, western Ukraine, explained the retrofit process. Truck models that you see parked on the street or being driven to the shopping mall are transformed into vehicles capable of, and ready to attack Russian tanks.

Most vehicles are purchased from Germany, Poland, Lithuania, Scandinavia, or the UK.

All of their money comes from crowdfunding through their website.

Once the vehicles arrive at the team in Ukraine, they’re retrofitted by volunteer mechanics and engineers who reinforce the body of the truck in to provide protection from mortar and shell fire and add a stand on the back of the vehicle for a machine gun or Javelins, NLAWs, and Stingers anti-tank weapons.

Adding a second layer of metal plate to the truck’s chassis is one of the most critical parts of the refitting process, Oleskii explains, as it has helped save lives.

“There have been a few cases when the vehicle has been attacked, but it has protected the soldiers and saved lives,” Oleskii said, showing Insider a photo of a truck that was still able to drive after a being hit by a Russian explosive.

All the trucks come decorated with a Ukrainian flag and the slogan, “Russian warships go fuck yourself.”

Alongside Car4Ukraine teammate Ivan Karbashevskyi, Oleksii has also created War-Stop.com, an initiative that allows anyone worldwide to purchase supplies — ranging from first aid kits and thermal underwear to radios and binoculars — for the Ukrainian military.

“We have found a way to make a real impact.”

Medically exempted from fighting in Ukraine’s armed forces, Oleskii said he wanted to find a way to support his country’s military effort meaningfully.

“I wanted to do this project because it makes a very direct impact. You buy a car, fix that car, arm it, put the thing on the back to hold machine guns or anti-tank weapons, and then have a burnt Russian tank.”

Oleksii adds that his parents are still trapped in Russian-occupied Kershon. He describes the “new normal” as phone calls to his father to the background percussion of Russian shelling. “Everyone has their arms and legs” when asked if his family is safe.

That’s why Cars4Ukraine is so important to him. “If there is at least something we can do to de-occupy the territory, we’re going to do that,” he said.