Home » Houston’s trash trucks are constantly behind schedule. Why? 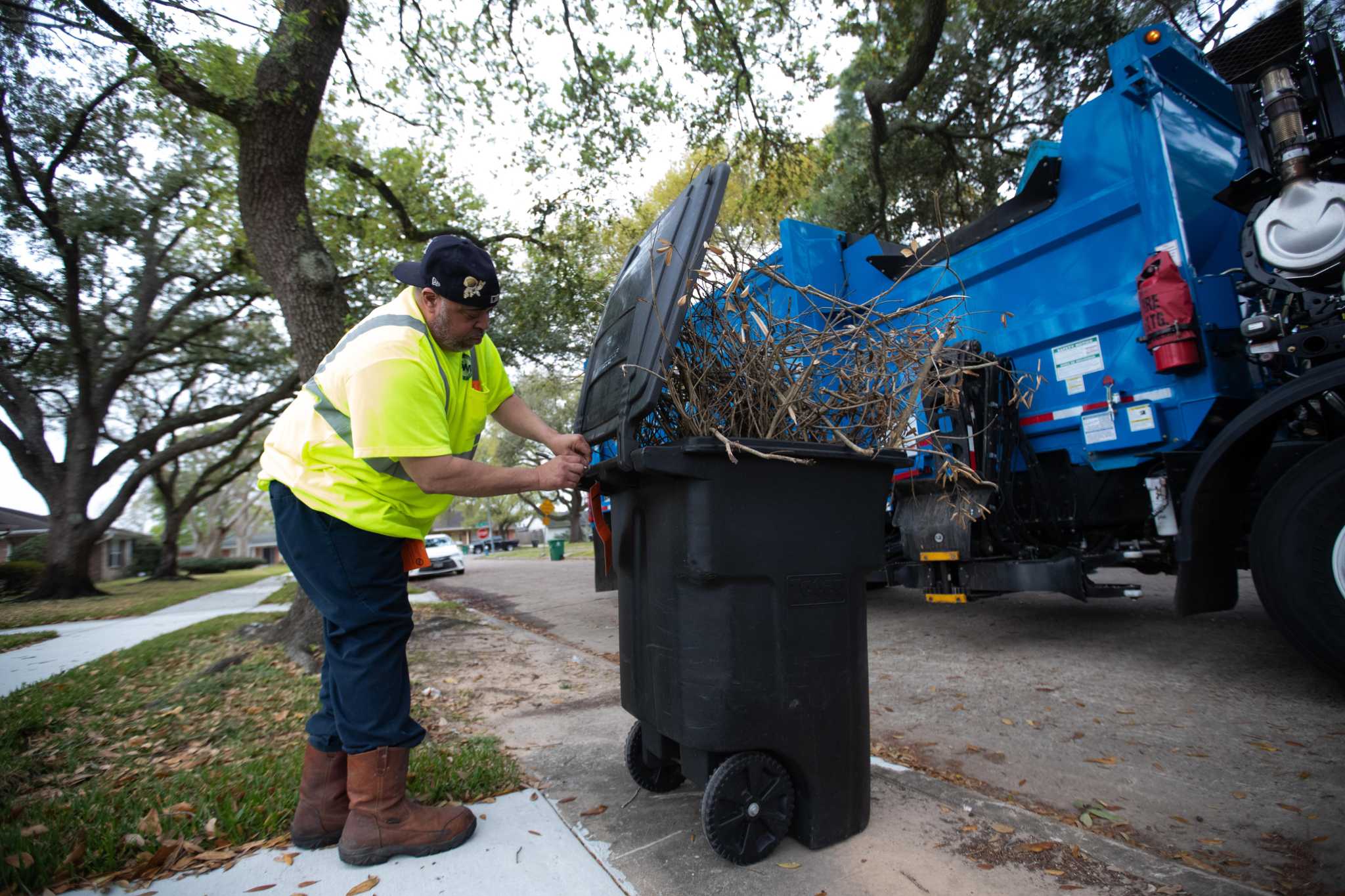 Houston’s trash trucks are constantly behind schedule. Why?

For the last few months, Juan Sorto and his neighbors have looked toward the curb on Thursdays and asked themselves the same uneasy question: Did the garbage trucks come?

Last week, they had. The week before, they had not, according to Sorto. What is supposed to be a routine, weekly service has turned into a more haphazard enterprise in Sorto’s corner of northeast Houston, near Tidwell and Mesa. Sorto said his subdivision’s black bins often have been skipped entirely this year. His neighbors have started storing garbage in their recycling carts, with some spilling out into drainage ditches.

“There’s been times where we’ve gone more than a week without it getting picked up,” said Sorto, a former chair of the city’s Super Neighborhood Alliance. The Solid Waste Management Department said it checked its records and confirmed trucks had been through the neighborhood, but it would monitor the neighborhood more carefully in the future.

The reason for the uneven service, city officials say, is Solid Waste does not have enough drivers.

The department’s workforce has reached its lowest point in decades, and the department rarely is able to assign drivers to all of its routes. It often has to pull employees off recycling, yard waste and heavy trash routes to pick up garbage bins, which must be collected weekly, per state law.

The maneuvering leads to extensive and almost chronic backlogs in recycling and bulk collections, and it burns out drivers, who have been required to work six-day schedules since 2018. Drivers often tally 60 hours a week on Houston’s streets. The department is running nearly double its overtime budget for the year, and it has incurred overruns every year since 2014, often doubling or tripling the budgeted amount. It spent $6.3 million on overtime last year, $7.5 million the year before.

He has been talking more urgently about the need for a garbage fee on residents, an idea tossed around City Hall for decades. The five other large cities in Texas charge an average of $32 a month and provide more resources to their departments. A similar fee in Houston would fund the department’s $89 million budget and then some, while freeing up money currently allotted to Solid Waste for other priorities.

Turner, who opposed a fee in 2019, now says one is necessary. He said he likely will leave that decision to his successor, but stopped short of guaranteeing he would not introduce a proposal before the end of his term.

“If the question is whether or not I’m going to bring some proposal that will assist the next mayor, and the mayor after that, I can’t say that that’s going to happen,” Turner said. “I don’t necessarily rule it out, but this is a relay race, and I’ll carry (the baton) until the end of December 2023 and then the next mayor will have to come in and go from there. But I don’t rule it out.”

On HoustonChronicle.com: Solid Waste plan makes a familiar pitch: Houstonians should pay a garbage fee of up to $25

Wilfalk would like to see a garbage fee implemented as soon as possible.

“I think what people have to remember is, we’re not saying, let’s put a fee in just to charge people, or because we want to ride around with Corinthian leather. No, this is the cost of providing the service,” he said. “We’re barely getting a C. We should be focusing on A+ service.”

Solid Waste has struggled for years with collection delays, a scarcity of trucks and other fleet issues, mounting 311 complaints and frustration among residents and their elected leaders. Its workforce, though, is at its lowest point in years.

The department fell below 400 workers last September for the first time in at least two decades. As of December, the department had about 394 employees, down from 439 at the beginning of Turner’s first term, according to the city’s monthly financial reports. It had been treading water for years, with roughly the same number of workers in 2012. Meanwhile, the department has added more than 13,000 residential customers and picked up another 200,000 annual tons of waste in the last decade, budget documents show.

Facing a dwindling staff and a nationwide shortage of commercial drivers, the city last June announced $3,000 signing bonuses for up to 100 new drivers, who make an average base salary of $41,550. It did not stop the attrition; in fact, the department has lost more drivers than it has gained since then.

Private employers, he and the mayor said, simply are able to pay more than the city. Walmart recently announced commercial drivers can make up to $110,000 in their first year with the company.

Solid Waste’s personnel issues come down to basic math. The department has 181 routes that must be picked up each day. Yard waste collection routes require at least two people each, as do heavy trash routes. That means the department needs a minimum of 234 people a day.

Even though the department has 245 drivers and collection workers, some of those work at dump sites or spend their day delivering truck parts. Add in the 10 or so workers who are out sick or on vacation each day, and Solid Waste starts struggling to find enough drivers to cover its routes.

And because trash collection is the top priority, daily staff shortages usually mean recycling and bulk pickup routes get delayed.

On the last Tuesday of March, for example, the department was able to assign drivers to 88 percent of its garbage routes. The drivers in each service quadrant cover their routes, then band together at the end of the day to scoop the unmanned ones. They returned on Wednesday, which used to be their day off, to pick up the green bins left behind the day before, when the city was able to assign just 59 percent of its recycling routes.

For drivers, that schedule is onerous. Wesley Cooper, a 15-year veteran of the department and reliable driver in the southwest division, wakes up around 5:30 a.m. every morning, long before his 8-year-old son and 12-year-old daughter get up to get ready for school. He drives his truck off the yard before sunrise and usually leaves work around 7 p.m. He spends an hour or two with his kids when he gets home before putting them to bed.

“I just wish people didn’t have to work so long,” Cooper said. “I don’t want to be that person that dies and my kid is like, ‘My dad was a hard-worker.’”

Wilfalk recalled finding one overworked driver passed out in the yard shortly after he became director.

“That’s the challenge. You want to provide the service to the customer, but you don’t want your people out all night. You don’t want the truck out there all night,” Wilfalk said. “Something’s going to get short-changed. It’s either going to be your resident, your equipment or your staff.”

On that Tuesday in March, Cooper embarked on a route near the Museum District with 1,052 homes. He has watched as townhomes or condominiums have replaced single-family houses, multiplying one bin into six or eight on his route. Those additions often are not factored into the route numbers.

Wilfalk said the department’s routes are over-extended, and many need to be divided into two or even three. Once that is done, he said, the department’s coverage numbers — how many routes they can assign to drivers — will be even lower.

Solid Waste approved a contract late last year with a company called Rubicon to equip trucks with technology that tracks their movements and pick-ups, which may help configure more efficient routes. The tablets also give management eyes on what drivers are doing minute-by-minute. Right now, drivers log their routes with pen and paper.

That could help hold drivers accountable — they get paid hourly, so not everyone feels the incentive to work quickly, and workers said some actually embrace the opposite: They work slower and get paid more. The city tried a similar technology in 2019, but later canceled the contract.

“It’s really hard to stay self-motivated when you’re getting paid by the hour because the longer you’re out here, the more you get paid,” Cooper said.

He uses a toggle next to his steering wheel — it looks like part of a video game — to guide the truck’s arm as he looks out the passenger-side mirror at the bins. Cooper likes to get the busiest or most crowded sections first in the morning, before people are out.

On Milford Street, a woman comes out with her bin at the last minute, and Cooper stops to wait for her. On Bayard, a bin was left directly in front of a telephone pole. Cooper picks it up and creeps forward so he can dump it into the back. Others leave no space between their garbage and recycling bins. Cooper uses the claw of the truck’s arm to create space and scoop the black one.

On one memorable route near Missouri City, Cooper recalled, he unloaded a bin and saw a bundle of live puppies falling toward the compactor. He smacked the emergency stop button to avoid killing them and called a supervisor.

How you can help your drivers

Make sure there is at least a foot between bins. When the bins touch, drivers often have to get out and separate them, delaying their route.

The lid on the trash and recycling bins must close completely. If it is overloaded, drivers can skip your bin. Most will try to pick it up anyway, but excess trash makes it more likely the waste will not make it into the back of the truck, forcing the driver to retrieve the trash himself.

Do not place bins under a trees or directly in front of a telephone pole. That affects whether the arm of the truck can swing the bin up and dump it.

Do not stand near the bin when it is being picked up.

By 10 a.m., Cooper’s truck was starting to fill. Before his first trip to the transfer station, where garbage is moved to larger trailers to go to the landfill, he deftly maneuvers the truck in reverse down a crowded Bolsover Street, scooping bins stored in clusters between parked cars.

As the clock hits 10, the tablet on the dash of Cooper’s truck tells him he has completed 58 percent of his route — more than 600 homes in three hours, or five per minute.

It used to be that Cooper could finish his route and leave. Now, he will help a colleague finish theirs, and then start attacking the unmanned routes. He has about nine hours to go.