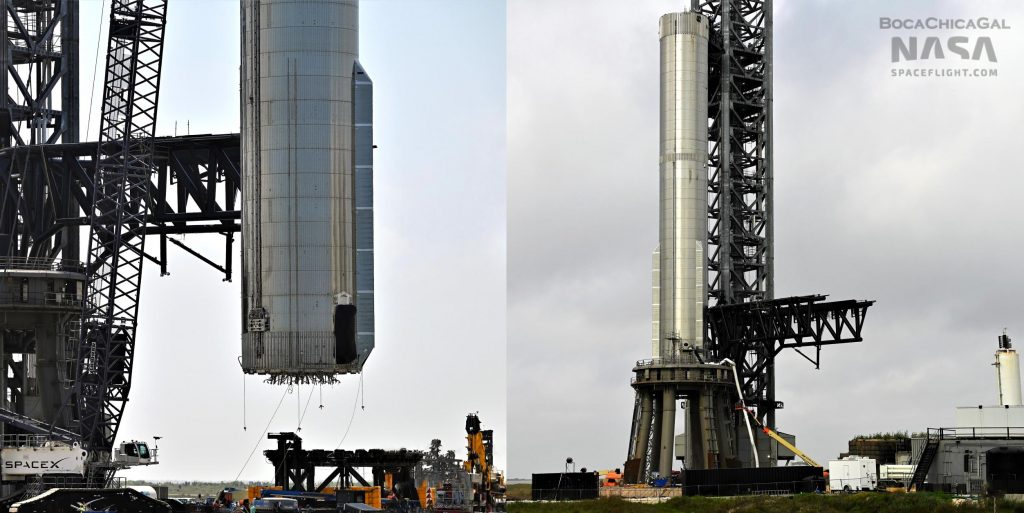 SpaceX has returned its newest Super Heavy to Starbase’s orbital launch site (OLS) after rapidly repairing damage the booster suffered during its first round of testing.

Super Heavy Booster 7 (B7) left the High Bay it was assembled in for the first time on March 31st and rolled a few miles down the road to nearby Starship launch and test facilities on a set of self-propelled mobile transporters (SPMTs). On April 2nd, the roughly 67-meter-tall (~220 ft; 69m w/ Raptors) rocket was installed on top of Starbase’s lone orbital launch mount (OLM), setting the stage for crucial qualification testing.

The start of that process was exceptionally successful. On April 4th, after a smooth launch mount installation, SpaceX quickly filled Booster 7’s propellant tanks with a relatively benign cryogenic fluid (liquid nitrogen, liquid oxygen, or both) to simulate the thermal and mechanical characteristics of real flammable propellant. Despite the fact that the test marked the first time SpaceX had fully filled a Super Heavy prototype’s tanks, Booster 7 sailed through the ‘cryoproof’ without any obvious issue.

On April 8th, SpaceX moved Super Heavy B7 from the orbital launch mount to a structural test stand that had been installed and modified just a few hundred feet away in the weeks prior. This is where Booster 7’s near-perfect start to qualification testing took a bit of a turn. Booster 7 is only the third full-size Super Heavy prototype SpaceX has tested since July 2021. Like Booster 3 and Booster 4 before it, Booster 7 features some major design changes that ultimately make the prototype a pathfinder, necessitating extensive qualification testing.

To name just a few of the changes, Super Heavy B7 is the first booster fitted with a 33-engine puck and the first finished Starship prototype of any kind designed to use new Raptor V2 engines. With all 33 engines installed and operating a full thrust, Booster 7’s entire structure – and its aft thrust section especially – would be subjected to around 40% more thrust and stress than Booster 4, which indirectly completed structural testing with the help of a sacrificial test tank. Beyond differences in thrust and mechanical stress, Booster 7 is also the first Super Heavy to reach the test stand with secondary ‘header’ tanks meant to store landing propellant.

It’s unclear if those header tanks were fully filled and drained during Booster 7’s cryoproof, but they would not be quite as cooperative during a different kind of cryogenic testing on the structural test stand. The stand SpaceX modified specifically for Super Heavy B7 was outfitted with 13 hydraulic rams to simulate the full thrust of the booster’s central Raptor V2 engines – up to almost 3000 tons (~6.6M lbf) compared to Booster 4’s ~1700 tons (~3.7M lbf) with a smaller cluster of nine engines.

Implosion at the Structural Test Stand

After a few false starts and minor tests on the stand, Booster 7 finally managed some significant testing on April 14th. Judging by the rhythmic shattering of ice that built up on Super Heavy’s tanks, the test stand was able to simulate the thrust of Raptors to some degree and subject the booster to major mechanical stress that was felt from tip to tail. Within a few days, Booster 7 was removed from the test stand and returned to the high bay on April 18th. Around April 21st or 22nd, an image was leaked showing extensive damage inside Booster 7, confirming that the Super Heavy’s test campaign had been forced to end prematurely.

Right away, the damage shown in the photo hinted at an operational failure, meaning that mistakes made by the rocket’s operators may have been more to blame than a possible design flaw. The photo shows a short portion of B7’s liquid methane (LCH4) transfer tube that runs through the booster’s new liquid oxygen (LOx) header tank, which itself sits inside Super Heavy’s main LOx tank at the aft end of the rocket – a tube inside a small tank inside a large tank, in other words. Super Heavy’s LCH4 transfer tube generally does what it says, allowing methane to safely fly down through the main LOx tank and fuel up to 33 Raptor engines. At full thrust, that tube would need to supply around 20 tons (~45,000 lb) of methane per second.

However, on top of merely transferring methane through the oxygen tank, Booster 7 introduced a design change that allows some or all of that tube to change functions and become a header tank mid-flight. That would require a system of valves that could seal off the main LCH4 tank once it was emptied, turning the transfer tube into a sort of giant steel straw filled with enough LCH4 to fuel Super Heavy’s boost-back and landing burns.

The damaged transfer tube in the leaked photo of Booster 7 doesn’t look that unlike what one might expect to see if they sucked through one end of a straw while blocking the other end, collapsing the center. Translated to the scale of Super Heavy, after an otherwise successful day of structural testing, SpaceX operators may have accidentally closed or opened the wrong valves while draining the booster’s transfer tube of liquid oxygen or nitrogen. As the heavy liquid drained from the tube, a lack of pressure equalization could have quickly drawn a vacuum and caused the tube to implode.

On April 29th, a SpaceX fan turned analyst published an analysis that convincingly pinpointed the moment Booster 7’s transfer tube collapsed. Simultaneously, because it showed that the transfer tube likely imploded during detanking, the analysis more or less confirmed the above speculation that the failure had been caused by a degree of operator error or poor test design. Of course, it’s possible that a hardware or software design flaw contributed to or caused the anomaly or that something like a pressure differential in the LOx header tank and LCH4 header tube could also explain the damage, but the accidental formation of a vacuum during detanking is arguably the simplest (obvious) explanation.

After the image of the internal damage leaked, the immediate consensus among fans and close followers was that Booster 7 was beyond repair. Instead, SpaceX appears to have proven those assumptions wrong and somehow managed to repair the upgraded Super Heavy to the point that it was worth testing again less than three weeks after returning to the high bay. On May 6th, B7 was rolled back to the launch site and installed, for the second time, on the orbital launch mount.

Prior to the failure, the general expectation was that SpaceX would begin installing Raptor V2 engines as soon as Booster 7 passed structural testing. It remains to be seen if SpaceX wants to repeat Booster 7’s cryoproof or structural testing to ensure that its quick repairs did the job before proceeding into static fire testing as previously planned. Nonetheless, hope lives on for the Super Heavy prototype and new test windows have been scheduled from 10am to 10pm on May 9th, 10th, and 11th.