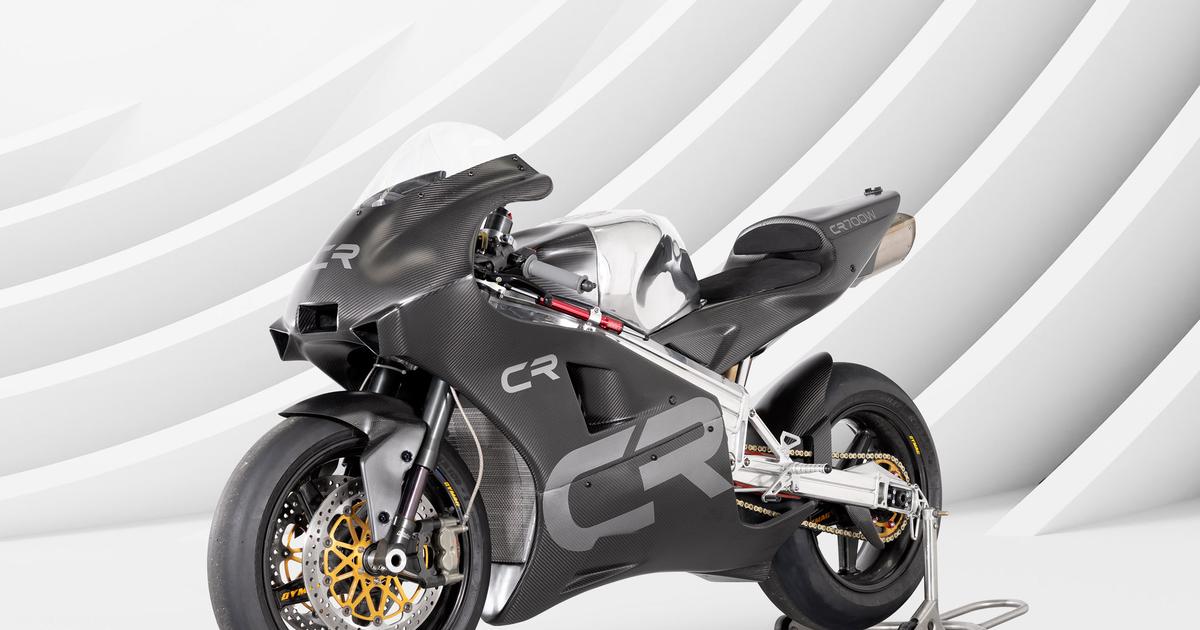 The extraordinary Crighton CR700W extracts an incredible 220 horsepower from a 690cc twin-rotor Wankel engine, and weighs just 129.5 kg (285.5 lb) dry for a MotoGP-level power-to-weight ratio. Its maker believes it could be the final word in combustion bikes.

Brian Crighton pioneered the use of twin-rotor Wankel motors in race bikes in the late 1980s. Working as a maintenance tech at Norton, he took the 85-hp, 588 cc motor from a crashed Norton Commander police bike, and hotted it up into a 140-hp fire-breather with almost no initial support from the factory. When coupled with a Spondon frame, this twin-rotor beast ran rampant through several British championships, including the 750cc Supercup, British F1 and British Superbike championships, until it was banned from competition.

Now, he’s distilled everything he learned campaigning those Nortons into an engine and bike of his own making, and it looks like an absolute monster. Turns out there is a replacement for displacement after all, and it’s a motor that doesn’t require pistons to constantly change direction.

The track-only CR700W features one of the most power-dense combustion engines ever created. Displacing just 690cc, this “Rotron” unit generates 220 hp at 10,500 rpm. That’s 319 hp per liter, naturally aspirated – more than the chart-topping Koenigsegg Jesko gets out of its 5-liter, 1,578-hp V8 even with two huge turbos bolted on.

It’s not some peaky, unmanageable beast either; its 105 lb-ft (142 Nm) of torque at 9,500 rpm is nearly as much as you get out of a 1,300cc Gen 2 Suzuki Hayabusa on a dyno. How’s this for confidence: “the CR700W’s rotary engine delivers the most tractable and useable power of any motorcycle engine in the world today,” says Crighton, “bar none.” We’d gladly volunteer to be the judge of that!

Crighton has stuck with what he knows chassis-wise, using a Spondon-derived aluminum alloy frame. Interestingly, the engine oil reservoir is in the frame spars, and the double-sided swingarm uses a single shock offset to the right side of the bike so a cavernous-looking exhaust can run right up behind the engine and under the seat.

This exhaust is interesting in itself; the energy of its airflow is used to develop a vacuum that sucks cool air into and through the engine, where it’s directed right through the finned apex of the rotor tips, giving the engine a free cooling boost that saps zero power from the engine. The remainder of the cooling is handled by an innovative liquid cooling system that runs channels right down into the core of the main rotor bearing journals.

Totally focused on elite track riders, the CR700W comes with Dymag carbon wheels and the buyer’s choice of Ohlins or Bitubo adjustable suspension. The steering head angle and swingarm pivot point are easily adjustable, allowing fine-tuning of the handling.

Crighton says he hopes this thing can give riders a MotoGP-like experience on track, but it looks to us like something entirely different. MotoGP bikes labor under a minimum weight of 157 kg (346 lb) and make up to around 290 hp, so the top dogs are putting out something like 1.84 hp per kilogram. The CR700W is not far off that mark, at 1.68 hp/kg, but at 27.5 kg (60 lb) lighter, this bike will be an exceptional dance partner in the corners and during changes of direction.

Mason Law, 2020 British Supersport GP2 Cup Champion, has had a chance to sling a leg over, here’s what he reckons: “Riding the Crighton is a phenomenal experience. The raw speed of the motorcycle is mind-blowing. It feels like being propelled down the runway of an aircraft carrier in a F-35 fighter jet. This raw speed, coupled with its low weight, means it has the power-to-weight ratio of a modern Moto-GP motorcycle but with buckets more torque.”

High praise indeed. Sadly only 25 will be hand-built by Crighton, and at a price starting from £85,000 (US$116,000). Rare and highly expensive to crash, then, so you’ll be lucky to see one in action, or hear the awesome howl from those two rotors working hard.

But the CR700W is another terrific example of the British obsession with lightweight performance vehicles that has brought us incredible machines like the Spirit GP-R and the Gordon Murray T.50 in recent years. Long may they prosper.

The video below shows the bike in action.

Ford unveils a tailor made, electric pickup in advance of F-150 Lightning