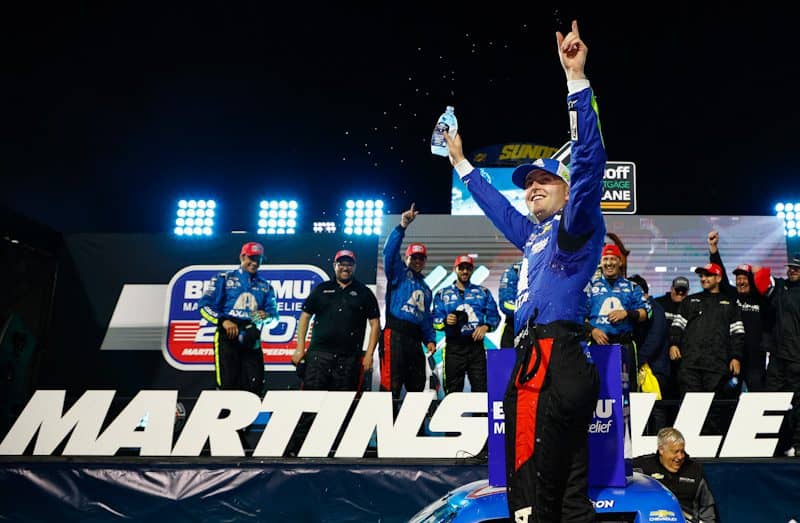 The Win That Could’ve Been

Up until the end of stage one, pole-sitter Zane Smith looked to be on the verge of winning his third race of the year.

For the entirety of the first 50-lap stage, Smith led every circuit around the paperclip-shaped short track en route to the stage win.

It appeared as though the Front Row Motorsports driver was well on his way to repeating his win at the same venue he had won at last October.

After many drivers decided to stay out during the following pit stop cycle, Smith would have to run down the leaders to have another shot. With fresher tires, it should’ve been simple, but the traffic proved hard for the No. 38 to mire through. He finished fourth in stage two.

But during the following pit stops on lap 103, Smith was given a speeding penalty, and he was relegated to the rear of the field. Despite his best efforts, the 22-year-old was unable to get back to the front and finished ninth.

On the other hand, 2016 series champion and part-time ThorSport Racing driver Johnny Sauter seemed to be the only driver that had a chance at beating the increasingly fast Byron.

Despite not finishing in the top ten in either stages one or two, and despite being involved in a skirmish that put Truck Series sophomore Hailie Deegan into the wall early in the event, Sauter had somehow found his way near the front toward the end of the night.

Alas, Byron led all but two of the final 96 laps of the 200-lap event. The Spire Motorsports No. 7 simply pulled away from the No. 13 of Sauter.

Despite that, Sauter ended his night in second. It was no win, but for a driver that hasn’t earned a win in almost three years, it was pretty darn close.

The No. 51 of Busch lead one lap tonight.

Any person who took a gander at the entry list prior to Thursday night’s race and saw Busch’s name probably picked him as a favorite to win — a song and dance Truck Series fans have done for years. His chances of winning were even more apparent after rain washed out qualifying and earned the Kyle Busch Motorsports truck a second place starting spot.

Instead, after the green flag, Busch went to third and instead of rallying back to take the lead immediately as we have seen the 36-year-old do time and time again, he hovered in the top five.

Kyle Busch is on the verge of his fewest laps led in a Truck Series start (1) since he led none in the 2018 race at Charlotte.#NASCAR

Even more interesting is his winless “streak.” Busch has now gone a whole four Truck Series races without a win — his longest series winless streak since 2013.

You may now play the world’s smallest violin.

In all seriousness, this by no means is a declaration that Busch has lost his edge. Not by a long shot.

Rowdy still finished third, which is his 10th consecutive top-three result in the series. What’s even better for the Las Vegas native is his next start will be at Charlotte Motor Speedway in May, a track where he has eight Truck Series wins, most recently in 2019.

But if he fails to win there and at his other planned start at Sonoma Raceway, it will be the first time he’s gone a whole season without a win in the series since 2012.

The Truck Series rookies of 2022 have a high bar to reach for after 2021 Rookie of the Year Chandler Smith ended the year with two wins and a long run in the playoff season.

So far, all of the full-time rookies have failed to reach that bar.

Throughout the whole year, out of all five of the ROTY contenders, only one driver has earned a top-10 result. It was part-time KBM driver Corey Heim with his win at Atlanta Motor Speedway.

Thursday night saw more of the same ill results for the rookie class. The highest of the three ROTY drivers was Lawless Alan, who finished 20th. Both Jack Wood and Dean Thompson failed to finish the race. In fact, both of them finish 35th and 36th — last and next-to-last.

Blaine Perkins wasn’t even able to qualify for the race — his first DNQ of 2022.

The rookies’ troubles began early in the evening on lap 9.

After a spin from Kris Wright on the frontstretch, GMS Racing rookie Wood found himself with nowhere to go and slammed into the No. 44 truck head on, ending his day.

With only one finish this season so far at Atlanta, it’s Wood’s fourth DNF out of five races this season — a downright dreadful beginning to this year.

Two laps after the restart, it was Niece Motorsports driver Thompson’s turn.

While the rest of the field was able to get back to speed and resume racing, the No. 40 Chevrolet never did, and an electrical issue forced him to stall on the track. Shortly after, a fire erupted in the 20-year-old’s cockpit, and Thompson quickly hurried out.

For Thompson, it’s his third DNF of the year.

I didn’t miss a shift.

No, he didn’t have an abysmal electrical issue that literally combusted his truck nor did he experience a hard head-on collision with another truck that ended his day.

Alan spun, and that’s about it.

Afterward, Alan spent the rest of his night fighting for a spot in the top 20, which he did earn. Although, it seems he ruffled some feathers with Deegan along the way.

A post-race chat for Hailie Deegan and Lawless Alan. pic.twitter.com/9VFjYVglpa

For all three drivers, the Thursday night race was another character-building chapter in their 2022 diaries. It’s easy to judge and critique young drivers when they’re only now starting out, but in comparison to the 2021 class of Chandler Smith and other playoff driver Carson Hocevar, it seems at this rate — and with no superspeedway races left before the post-season begins for the rookie truckers to earn a wild card victory — there won’t be any rookies fighting in the playoffs this year.

Points Report: Rhodes continues a quietly successful 2022 season with a fourth top-five result out of five races and puts himself in the regular season points lead by four points over Chandler Smith, who is locked into the playoffs.

Zane Smith, despite being the playoffs point leader, is in third with Stewart Friesen behind him, 25 points behind the lead.

Tied for fifth are Nemechek and Christian Eckes with a 44-point deficit. Tanner Gray sits only three points behind them both in seventh. Ty Majeski is eighth, 52 points behind Rhodes.

💭 “I didn’t even mean to hit you!”@benrhodes and @JHNemechek had a friendly debrief and shook hands. pic.twitter.com/aQXDA9S8T0

Up Next: We’re going dirt racing.

The Truck Series takes on its first of two dirt races on the series schedule next weekend at the dirt-covered Bristol Motor Speedway. Coverage of the Pinty’s Truck Race on Dirt starts on Saturday night, April 16, at 8 p.m. ET on FOX Sports 1.

A daily email update (Monday through Friday) providing racing news, commentary, features, and information from Frontstretch.com
We hate spam. Your email address will not be sold or shared with anyone else.